Our garage openers are both Linear LDO50 which uses 318MHz frequency for the receiver, and are about 12 years old. The security type is “MegaCode”.

We live directly across from a major airport, and not far from a smaller airport, so we typically get a LOT of radio interference with our garage openers. I can often see the receive indicator on the openers glowing solid red, or blinking rapidly for several seconds at a time. This causes the door to open slightly and then stop, and this repeats several times. Some days I just had to get out of the car and use a key to get in through a side door. The wall buttons for the openers always work, so I know there is no physical issue with the openers.

So I decided to try adding a new receiver that uses “Security+ 2.0” and 3 simultaneous frequencies (310/315/390MHz) since it is unlikely that all 3 will be getting interference at the same moment.

I bought the Liftmaster 850LM receiver that can control up to 3 openers. I also bought the compatible Liftmaster 892LT two-button remote controls.
NOTE: The remotes are able to use three different modes, and you must choose which one you will use. 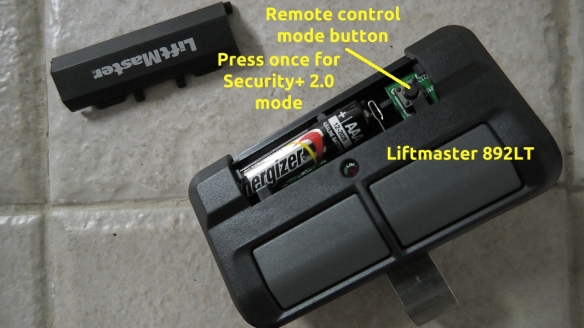 3. I attached the receiver to the angle iron that holds the first garage door opener motor. I plugged in the power adapter and tied up the slack in the wires. 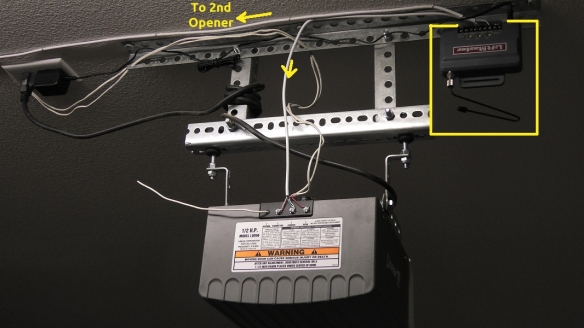 4. I used common telephone cable to do the wiring. I only needed 2 wires to each opener, so I cut off the remaining wires. I chose at random to use Blue and White. I chose to use Blue as the “common” and white for the other. No electricity is passing through these wires, it is simply providing “continuity”. That is, when the receiver gets an authorized signal, it essentially closes a switch that connects the two wires. The garage opener senses that the two wires have touched and opens or closes the door. 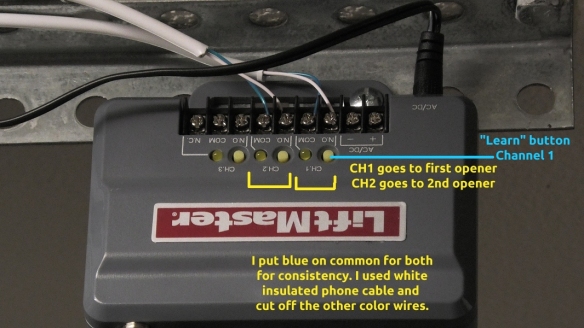 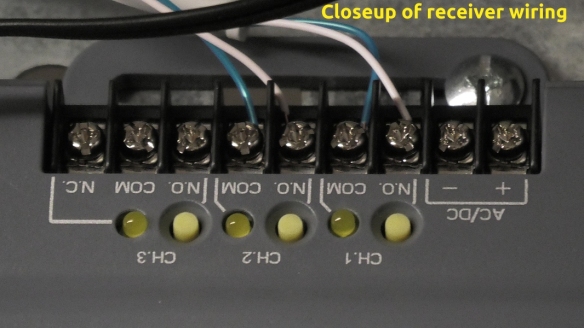 5. I stripped the ends of the wires and attached a short piece of cable from CH1 of the receiver to the Pushbutton and Common terminals on the first opener. I stapled the cable to the ceiling using curved staples for wires. 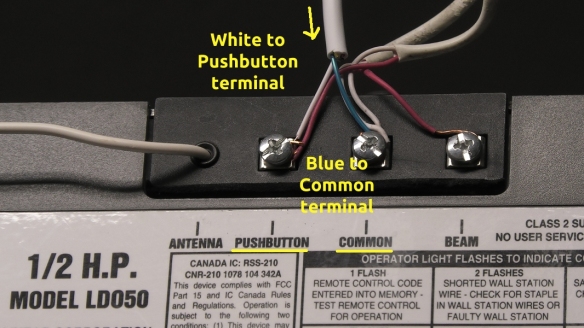 6. I did the same steps to connect CH2 of the receiver to the common and pushbutton terminals of the second opener, this time using a 20ft piece of cable. 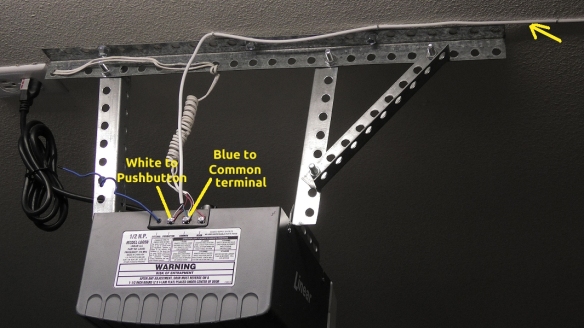 That’s all there is to it. I tested each button on each remote and the doors opened and closed as expected.

I then erased the memory of the built-in receiver in both Linear units, and gave one of the new remotes to my wife, and took the older remotes, removed the batteries, and stored them in a box. Time will tell if this solution works well.

I needed a portable field unit for setting up IP security cameras that I install. It needed to have POE, a good battery, and a good screen so I can see the video clearly and any camera menus.

I tried out the ToteVision LED-710-4KIP based on the feature set it has. It has several tools such as cable testing, POE voltage testing, and various camera tests.

It has some interesting features for setting up cameras, such as detecting camera IP and auto-setting itself to the subnet range of the camera.

But the primary purpose of using it to set up IP cameras in the field doesn’t work because the buttons it has for focus and zoom do not work with all cameras, even ones that have ONVIF (as almost all do these days).

I connected it to a Samsung SNV-6084 dome camera (about 2 years old), and it was able to find the camera’s IP address and take me to a login screen. It brought up the live video, which was out of focus. I tried the various physical buttons such as Near, Far, Tele, and Wide, but none of them had any effect on the camera.

I tried it on two Vicon cameras, and the live video screen would instantly close as soon as it tried to show video. That makes this unit useless to me.

I was able to go to a webpage in Firefox on the unit (I just happened to know the URL for focusing on this camera) and it brought up controls that I could use for focusing, but no image. That is another problem with this unit. If the IP camera requires a plugin such as Silverlight in order to view video on submenus, then there is no way to get the plugin to load and function on the ToteVision unit. The built-in menus have buttons specific to Hikvision cameras, so perhaps it was designed around their use rather than other brands, but nothing in the literature suggested this.

Those problems make this unit useless to me. I’ve used cameras from other companies that also require plugins to view video and make changes to the cameras, so this isn’t an uncommon situation. Camera makers are starting to move away from plugins, which is good. But I have so many cameras in the field already that I have to be able to use plugins. This puts me back to using a laptop and a POE switch instead of a more portable unit.

When a new singer starts collecting gear for doing gigs, something that can be very confusing is the kind of cables needed. First I’ll show pictures of the different cables connectors most commonly used so you’ll know what I’m talking about. There are two primary kinds of connectors, and they can be mixed on the same cable. (I will be speaking in general terms for this blog entry, there are exceptions to some things.) I will repeat some important concepts in different ways because, well they’re important. 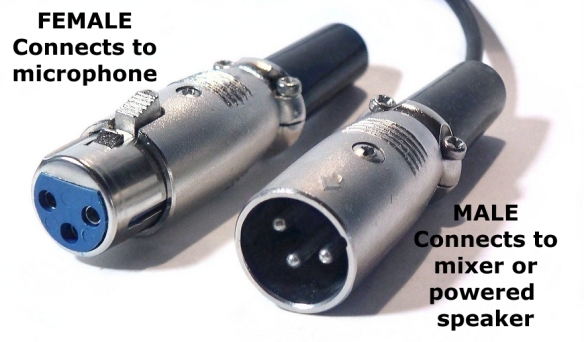 XLR to XLR cables are typically “balanced” and provide more signal strength for weak audio sources like microphones, while protecting the weak signal from radio interference. 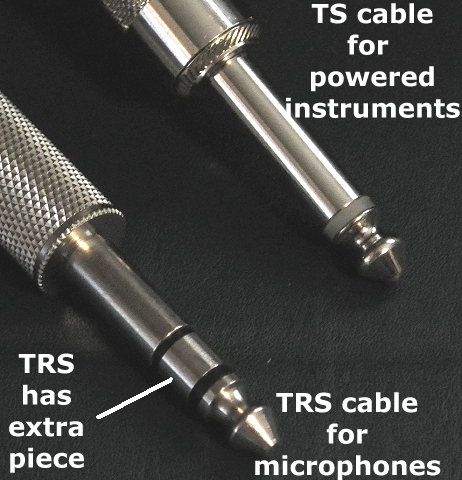 You may occasionally hear people call a TRS plug “stereo” and a TS plug “mono”. This isn’t the best terminology for our application as singers, but be aware that the terms are sometimes used. I’ll cover this again shortly.

STEREO VS MONO
I’ll clarify something right now because people (like myself when first starting) get confused about mono and stereo, and the different kinds of cables. People imagine that “stereo is better”, so they want a “stereo mic cable”. A typical singer’s microphone is MONO. An XLR cable carries that mono signal to the mixer, even when the other end has a “stereo” 1/4-inch or 1/8-inch connector on it. The “stereo” plug is more correctly called a “balanced” plug in this situation. (A TRS cable can indeed carry a stereo signal or two signals, but only for certain instruments. It is better to think of it as “balanced”.)

Balanced means it is using the three pins to send the signal in a way that doubles the signal strength and minimizes signal interference, which lets you run longer cables without picking up odd signals from radio. The balanced 1/4-inch plug is also called a “TRS” plug (Tip, Ring, Shield from the old telephone operator days). The three pins on the XLR end match the three parts of the 1/4-inch TRS plug.

A “mono” 1/4-inch or “unbalanced” plug is called a TS plug (Tip, Shield). TS cables are sometimes a bit cheaper, but for singers are often not the best choice. I’ll repeat some of these concepts a few times. TS cables are usually intended for powered instruments, not microphones. They can work, but the signal strength is usually half of a TRS connection, and are more susceptible to Radio and CB Radio interference.

Usually a microphone cable will have XLR connectors on both ends. But sometimes, a microphone cable will have an XLR connector for the mic, and a 1/4-inch plug on the end that goes into a mixer board or directly to a powered speaker input. If the plug has 3 sections, it is a balanced TRS plug. If it has 2 sections, it is an unbalanced TS plug. Either kind will work, but TS carries half the signal strength. Typically, it is preferable to have the XLR or TRS kind to minimize any radio interference with the microphone cable. Instruments will most often use cables with 1/4-inch plugs on both ends, and they are almost always TS plugs because they don’t require signal protection.

MORE ABOUT MONO AND STEREO
A mixer board at a live performance will typically only output mono (the same signal through both speakers) unless you use the pan knobs to separate various inputs into left or right. But it is very rare that you would ever want to move the pan knobs from the center at a gig.

I’ll say that again: At a live gig, the output from both speakers is nearly always mono, even with multiple speakers on each side. This is because the audience on one side still wants to hear all of the music, and they won’t if only half of the band is playing through the speaker on their side. The pan knobs are usually left in the neutral middle position.

KINDS OF INPUT AND CABLE TYPES FOR SINGERS
– unbalanced mono (instrument, strong signal doesn’t benefit from signal protection). This can use a TS cable, though a TRS may work. Typically, you would never connect an instrument to an XLR input on a mixer board because the board is expecting a microphone on that kind of input. It isn’t impossible, but more rare.

– balanced mono (mic, soft signal benefits from signal protection). If the output end is a 1/4-inch plug it should be a TRS cable, though a TS will still work but at a much lower strength.

Microphone cables should almost always use XLR connectors on each end (female-male). If the far end of a microphone cable is a 1/4-inch connector, it should be a TRS connector for the best signal quality. However, a TS connector will still work but with half the strength.

XLR inputs on mixers and powered speakers are typically only for microphones (“mic level” input), or there may be a switch on the device that you can set to Mic or Line Level (meaning an instrument like a keyboard or guitar). Most instruments have a much stronger signal than a microphone and will typically have a 1/4-inch TS plug for attaching to the mixer or speaker. The mixer board may also have a “Hi-Z” (high impedance) button if an instrument like a guitar is being plugged into a particular port. It tells the board that you aren’t using a microphone and to handle the signal differently.

SUMMARY
I hope this helps you to understand better what the various kinds of cables and connector are, and how they are typically used.